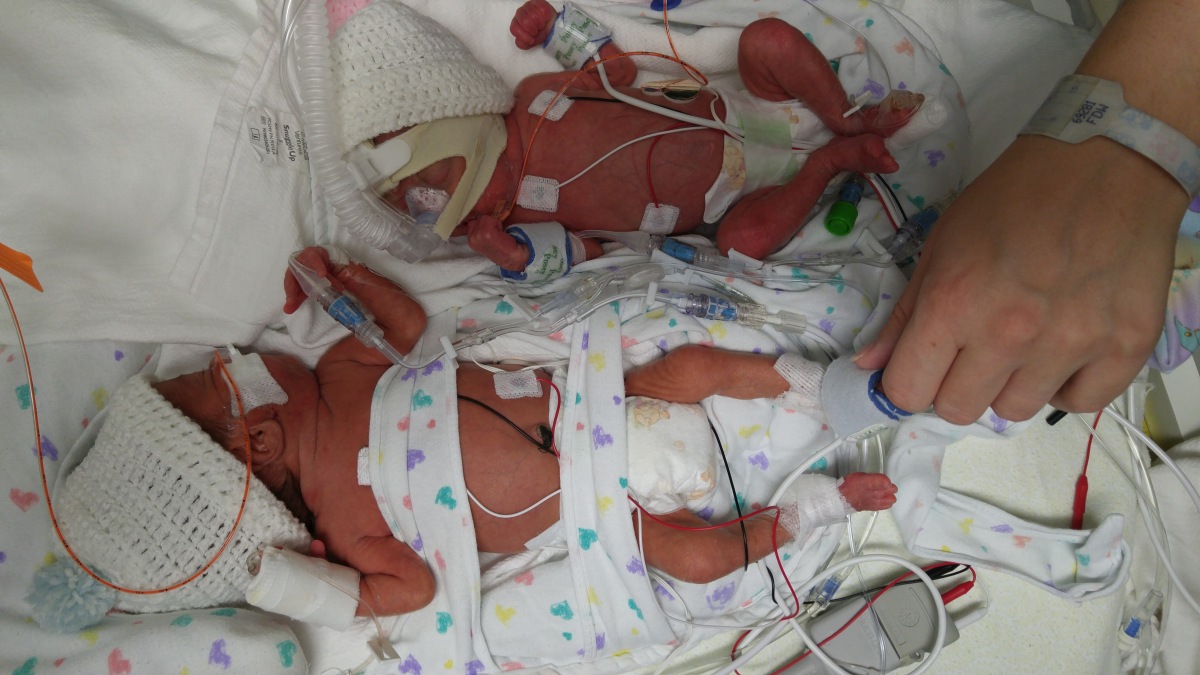 Every year, Nov. 17, is World Prematurity Day. The goal of this day is to bring awareness to preterm birth and the affects on families. So let’s talk about what it is like to deliver too soon. I won’t begin to speak for all parents of infants born too early. There are too many variables. I am just one mother. This is just my perspective.

When I gave birth to my twins at 24 weeks and 6 days, I was not prepared for the life I was about to live. Before my twins, I had given birth twice to beautiful full-term infants who tipped the scales at just under 9 pounds each—a daughter in 2009 who weighed 8 pounds, 14 ounces, and a son in 2013 who weighed 8 pounds, 15 ounces. It had never occurred to me that my third and fourth babies would be born too soon. I was cocky even when I was in preterm labor, because my previous pregnancies had gone so smoothly. Clearly, I WAS WRONG!

One of the first things I learned after my twins were born is how much everything hurts when your babies are born traumatically and whisked off to the neonatal intensive care unit (NICU). I’m not talking about physical pain that could accompany any delivery. I’m talking about the raw emotional pain I was in then, and continue to be in more than three years later.
Labor and Delivery isn’t Set Up for Parents of Preemies
The staff working in labor and delivery aren’t prepared for micropreemie infants. That’s what my twins were. Born at 24+6 weeks, weighing 1 pound, 11 ounces and 1 pound, 15 ounces, they were emotionally hard on the staff who attended my delivery. The thing is, it was emotionally hard on me too. I’ll even go far enough to argue it was harder on me than it was on them.

There are two things I vividly remember immediately following my twins’ birth. The first was the way the labor and delivery nurses comforted the pregnant resident who delivered my twins. I had just delivered baby B. Not a sound from him could be heard. The NICU nurses who attended the delivery were focused on him and the labor and delivery nurses were focused on the resident who began crying. My babies were so small, so early, so fragile that the resident in charge of the delivery was crying. Since she was visibly pregnant, it was hard for her to witness. The nurses consoled her. They told her it would be OK. Her baby would be fine. She should take a few moments to react to the trauma she just witnessed and process the situation.

Do you want to know what didn’t happen? No one talked to me. I had just delivered not one, but two babies more than 15 weeks before my due date. I had spent the last 12 hours in labor trying to keep those babies inside my body a little longer. I had just reached the point where we thought my labor was successfully stalled when my water broke and I was rushed into a delivery suite without time for any medications. I had just been told not to deliver the placentas and had an OB-GYN elbow-deep in my uterus to retrieve said placentas so they could be sent to the lab for further examination. Did I mention there was no time for pain medication?

The second thing I remember so vividly is recovering from the delivery in unit’s post-anesthesia care unit. Still, no one talked to me. A nurse sat with her back to me charting. She would check my vitals, but she didn’t really talk to me.

The first 30 minutes of my recovery I was alone with a nurse in a cold, bright, white recovery room. I had no idea if the babies I had just delivered were alive, I only knew they had been taken to the NICU. After that first half hour another woman was wheeled into the recovery room. It was loud. She had just had a c-section. She sounded overwhelmed. The nurse with her reassured her that she had done great. Her husband walked into recovery just a few minutes later. You could feel their excitement about having just become parents. They talked loudly. There was laughter. A little while later, a nurse brought in a baby wrapped in a blanket. There were gasps and cheers for this perfect little being who had begun to cry. While a celebration of the start of a new life was taking place on the other side of a curtain, I remained alone. Still no one talked to me. I spent most of my time in recovery sure twin B had died, trying to convince myself his death was for the best because I wasn’t equipped to raise four children.

After I had stayed in the recovery room for the prescribed amount of time, I was taken to a postpartum room. I was alone. I don’t remember for how long. I do know I could hear the newborn babies in neighboring rooms crying. Eventually someone took me to the NICU so I could meet my twins. I’m almost positive it was my husband who took me to the NICU.

I don’t think labor and delivery nurses knew what to say to me. They didn’t know how to interact with someone in my shoes. Thankfully NICU nurses were well equipped to handle me. They explained the world of the NICU and everything that was happening. During the next six months, they talked to me and they comforted me.
Everything Stings
Three years later, everything still hurts. Like grief, the pain is there, but it changes over time. The things that initially stung are now dull, but new things sting.

In the beginning it stung when people didn’t acknowledge I had just given birth. It stung when my boss had no expression of concern or wishes of congratulations. I’m sure people didn’t know what to say. It stung when I was discharged from the hospital and my babies remained, fighting for their next breath. It stung to see brand new babies and their parents being discharged home together with balloons, smiles, and well wishes from nurses. It stung when I went to my postpartum check up and my OB-GYN spent the visit trying to diagnose me with postpartum depression because I wasn’t my happy normal self, instead of hearing one of my twins had just been transferred to another hospital so he could have brain surgery. It wasn’t depression, it was worry and grief.

Today, the things that sting are the casual comments made by people who have no idea I have delivered early. It stings to hear (or read) about someone who hopes doctors take this baby early because pregnancy is “miserable.” I would prefer to vomit every day for 40 weeks and be kicked in the cervix by an elephant than to sit next to a plastic box every day for months while I have to ask to hold my baby, and some days be told no. It stings to read something that is supposed to reassure new parents but is wildly insensitive to those who have delivered early, or to those who delivered a very sick baby.

It seems, at least according to something like this, there is no greater sorrow than a deafening silence after your baby is born. That feeling of panic and desperation, not knowing if things will be OK, wondering if everything you just experienced was worth it.
Bottom Line
I get that this is my issue. I don’t expect people who are uncomfortably pregnant to stop complaining. I don’t want people to stop trying to reassure others that their birthing experiences, regardless of whether it followed a desired birth plan was indeed worth it. Yes, some things still are raw for me. But I don’t think life needs to contain more trigger warnings than it already does.

Here’s what I do want. Take World Prematurity Day as an opportunity to learn something about babies who are born too soon. The March of Dimes is a great place to start. Spoiler alert: premature infants aren’t tiny versions of full term infants; they aren’t in the NICU just to get bigger. If someone you know delivers early, reach out. It’s OK to say:

I also want healthcare professionals working in labor and delivery to recognize the pain that can accompany preterm birth. Learn how to better support parents who have just delivered preterm infants. Develop a better tool to screen for postpartum depression and post-traumatic stress disorder. But most importantly, don’t ignore us just because our experiences make you uncomfortable.