It’s 2020. I should not need to tell you some children, like some adults, live with disabilities. But here we are.

Children, like adults, come in a variety of sizes and abilities. Children can be blind. Children can be deaf. Children have cerebral palsy. Children can have arthritis. This is only a short list of some things that can and do affect children. The list is long. The list for adults is long, so having an equally long list for children shouldn’t come as a surprise, but I would be willing to bet it hadn’t crossed your mind.

Some of you may even be thinking you don’t need this reminder, but you likely are wrong. Most people like to think they are inclusive, but they aren’t. They often forget children with disabilities exist. Sure, when they see a doll with crutches, or a cartoon character with a wheel chair, they think it is sweet to have diversity in toys and programing. But in your day-to-day interactions, it’s forgotten. When the little league parking lot is packed, you park in the handicapped parking spaces, or you park in the accessible space between those spaces. You give the mom using a handicapped placard with her young children the once over, assuming she is using someone else’s card. You readily post some product is rediculous and unnecessary, mostly because it was of no use to your typically developing child(ren).

It has to STOP! You must think before you speak, post, or joke. Your words can be hurtful and isolating. It’s time to think about other people and grow into a society of compassionate human beings who know at all times their personal realities are not necessarily the realities of everyone else.

I’ll give you two examples: 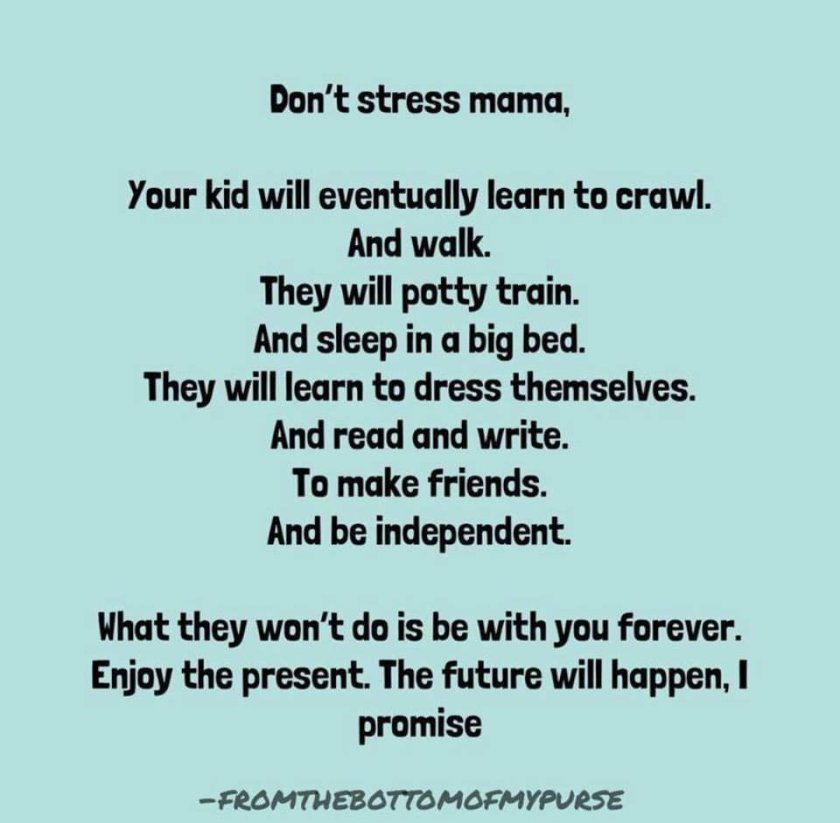 This lovely [insert eye roll here] meme. It’s popular among moms. I know the spirit of the message is to encourage moms who feel like they are drowning in motherhood. It’s supposed to tell you to hang in there, it gets better, and this too will one day be a memory.

The unintended, or at least I hope it’s unintended, message it sends to special needs moms is you’re not part of this parenting club. Your child isn’t like other children — your child is different. Believe me, we don’t need your meme to remind us our children’s childhoods look different from that of typical children their ages.

Everything preached to mothers in memes like this one is a big ball of maybe and hope for a lot of special needs moms, myself included. Medical professionals can’t promise me my youngest son with learn to walk, use the toilet, dress himself, read and write, and be independent. In all honesty, at 3 he can’t sit, he can’t crawl, he can’t feed himself, and he can’t talk. So while you are busy helping other moms to live in the moment because this is only a phase, some of us are stuck in survival mode, and will be for the foreseeable future.

Here’s the thing. As stressful as survival mode is, it does get better. We all find a rhythm and system that works for us, and life goes on. We set our own “normal” that includes medication times, doctors appointments, and therapy appointments.

If you are a mom who is new to raising a child with special needs, I will promise you this: you won’t always be so overwhelmed. Your life will get easier. Easier because you need fewer things as your child ages, or easier because handling your child’s extra needs has become something you don’t even need to think about anymore; that I don’t know. I just know you won’t always be so overwhelmed.

Very recently, I was watching the evening news on my local station. The station had information coming out of a national technology conference. An event highlighting new tech developments in a variety of applications. Normally, this segment of the broadcast would not have stayed with me. But I remember it clearly for two reasons.

First, one of the developments highlighted was a mind controlled video game controller. As information was reported, I was so excited. I thought, YASSS! As my son grows older, he will be free to love video games as much as his older siblings because regardless of how his fine motor skills develop, he will be able to play too. This is AMAZING!

My excitement was quickly turned into rage because of the news anchor’s follow-up comment. He said, “Wow, are we really getting that lazy?”

I will never forget his words. How can someone in the public eye be so obtuse to assume technological advances that essentially level the playing field for children with motor impairment was developed simply because we are lazy?

I know, I’m acting in typical millennial fashion, crying offensive at a simple on-air remark. I’m sure the anchor didn’t mean to be offensive. I’d be surprised if I learned he had a deep-seated hatred of people who are differently able. I know it was a comment made because he just didn’t think about it beyond his own reality.

BUT THAT IS MY POINT! We need to think before we open our mouths and make comments. Thinking about other people’s feelings and situations isn’t being a “snowflake,” it’s being an adult.

For eneratio , parents have taught their children to think of others.

These rules should apply to adults too. Think before you speak. Take a moment and think about how other people may be affected. Just because something doesn’t apply to you, or even to the majority of the population, it doesn’t mean it doesn’t have a profound affect on another segment of the population.

I’m not asking for special treatment for children with special needs. I’m asking you simply remember they exist.

Leslie is a stay at home mom of four - two girls and two boys, including a set of twins. In another life she worked in healthcare public affairs, and spent the her first seven years of motherhood working outside the home. Motherhood is nothing like she anticipated. She began writing again to both process the curve balls her children throw, and to drown out a decade's worth of animated programming. View all posts by Momming Good Bad Ugly